The New Hanover County Beekeepers Association is excited to announce an in Person Beginner Bee School!

We plan for this to be an opportunity for you to learn about one of the most important insects in the word!

Hopefully you will “catch the bug”, and start your very own apiary; or, you may simply choose for this class to help you become more educated about the honey bee (apis mellifera)! Either way you will leave amazed about this extraordinary insect!

Check Back for Upcoming Dates

Anthony Snider is Associate Professor of Environmental Studies (EVS) at the University of North Carolina Wilmington where he teaches the introductory bee class, runs the EVS apiary, and serves a faculty mentor to the UNCW Beekeeping Club. He has been keeping bees off and on for over 20 years and is a Certified Beekeeper.

David Bridgers is a Master Craftsman Beekeeper and been keeping bees off and on since 1969. He has volunteered his time to teach and serve with the NCSBA and locally in Columbus, Pender, and New Hanover Counties. He has served as an advisor and SME (subject matter expert), to various cities, counties and to UNCW. He has volunteered his time and expertise to give talks to many local civic groups and has many exciting bee experiences over the years! He and his wife Kay have managed upwards of 250 colonies, sending hives to pollinate crops in Florida and the almonds in California.

Bill Morrison is our NHCBA treasurer since 2013. Bill has taught science and computers at the highschool and college levels over the years. He has also taught a Beginner Bee class at CFCC. After moving to Wilmington in 2006, Bill began keeping bees when he learned his younger sister started raising Russian bees in upper Michigan, “figured it was fun and easy!” He currently has 9 hives on a 1/3 of acre vegetable garden in his back yard. Bill has volunteered his time and expertise to give “bee talks” to various groups over the years.

Susan Warwick is the NHCBA president and has served in various capacities within the club over the years. Susan began keeping bees after taking the NHCBA Beginner Bee School 11 years ago. Taking the class definitely caused her to, “catch the bug” that started the beekeeping adventure. She has maintained upwards of 40 hives and currently has 35 hives. She has hosted field trips to her apiary to adults and children. She has also setup exhibits at the CF Fair and Expo.

Brian West started keeping bees in 1989 with 2 hives after he becoming a Certified Beekeeper. Then in 2010, he started a sideline commercial pollination business. In this venture, he was managing and utilizing approximately 250 hives for about 10 years. Presently he manages 25 hives. He has mentored numerous “newbees” and given numerous “bee talks” to various civic groups. He has gone out of his way to help those just getting started. For example, he drove to meet a new “beekeeper”, who was driving down I40 with their newly acquired bees, unsecured in a cardboard box! Brain met them, drove their car back to Wilmington in a bee suit and let them drive his truck home! Now that’s going the extra mile!

Resources From Our Blog 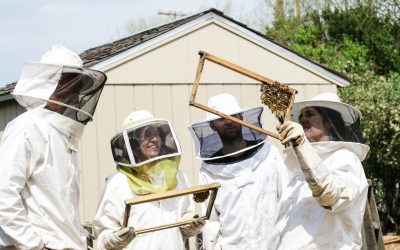 Learn about the history of the New Hanover County Beekeepers Association.  Download the presentation here.Major Accomplishments   HOSTED THE NORTH CAROLINA STATE BEEKEEPERS ASSOCIATION in 2014 A club effort spearheaded by then President Ashley Stephenson and...

END_OF_DOCUMENT_TOKEN_TO_BE_REPLACED

About thirty members gathered for the August 19, 2021 meeting as we gave attendees the opportunity to say goodbye to some old equipment and hello to some new. Here is a picture of one of our newest members, the proud winner of a honey extractor from the club's raffle:...

END_OF_DOCUMENT_TOKEN_TO_BE_REPLACED 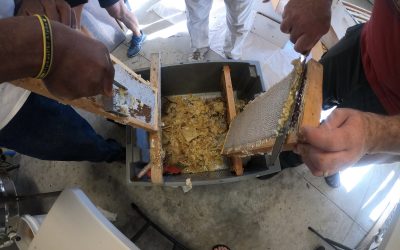 May 2021 NHCBA MeetingHoney Harvest Meeting! We held our first in person meeting since the covid shut down May 20th! Great to see everyone and have everyone paritcipate! We had a speacial guest from Retro Meadery share samples of their products and give us their...